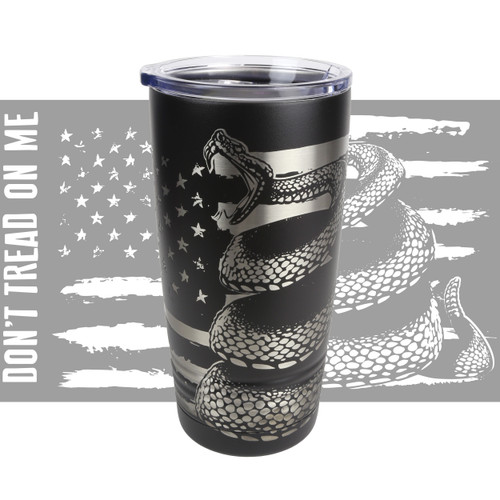 DON'T TREAD ON ME

The Gadsden flag is a historical American flag with a yellow field depicting a rattlesnake coiled and ready to strike. Positioned below the rattlesnake are the words "DONT TREAD ON ME."[note 1] The flag is named after American general and politician Christopher Gadsden (1724–1805), who designed it in 1775 during the American Revolution. It was used by the Continental Marines as an early motto flag, along with the Moultrie flag.

This 20 oz. stainless tumbler is double wall insulated, and powdercoated. We laser etch off the powdercoating to reveal the raw stainless, and do it all the way around the cup! No puny logo like everybody else, this artwork is 360 degrees!

This is not just a vinyl sticker that will bubble and come off, this is a very permanent application.

From the same Collection

From the same Collection